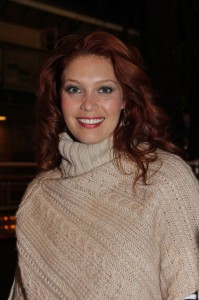 Thanks to Armageddon Expo, I talked to Alaina Huffman, who has played Maureen Bowers on Painkiller Jane; Lieutenant Tamara Johansen on Stargate Universe; Dinah Lance/Black Canary on Smallville; and Josie Sands/Abbadon on Supernatural.

Due to a technical malfunction, this interview begins with a photo overlaid with sound only but kicks in with actual video at about 4 minutes. This interview will be available as an audio only file (podcast) soon, but we have to catch up with other interviews first. All these awesome authors and PAX interviews, y’know, and the minion insists on keeping his day job because we have bills to pay. (Dark Matter costs us money to run, it doesn’t pay the bills.)

As I packed up, I chatted to Alaina about her gorgeous daughter Charlie who featured in Stargate as a baby bump. I’ll write those comments up soon. As I opened my mouth to ask permission to photograph Charlie, organisers came to hustle me out so the next group could enter. So, no Charlie photo

You were enticed into modeling but left it to pursue an acting career; why is acting more enticing than modeling?

You have a long list of acting credits to your name. What role stands out as your favourite and why?

Have you played any character that you particularly like or identify with?

How about any character that you particularly did not like?

C.J. Dee ‏‪@Kinestra asked: ‪ Being how powerful the character of Abbadon was, will she be making any reappearances in the future? (She was “killed”)

How do you choose what roles to accept or reject?

This weekend you’re appearing at Armageddon Expo. What can fans expect you to talk about during your guest appearances?