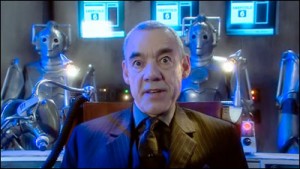 The ‘Age of Steel’ is part two of the story begun in ‘Rise of the Cybermen‘ and will contain spoilers for part 1.

Towards the close of ‘Rise of the Cybermen’, Lumic, the cybermen’s creator, sends the cybermen in to Jackie’s birthday party where they confront the President of Great Britain, informing him he is eligible for a ‘free upgrade’ that is compulsory. When the President declines, he’s ‘deleted’. No-one else refuses the upgrade but the cybermen go on a rampage, killing party guests without offering them upgrades.

The Doctor, Rose and Pete flee, knowing Jackie has probably been captured. Our intrepid trio are surrounded, captured by cybermen. The Doctor accepts the upgrade but the cybermen reject him, opting for ‘maximum deletion’ because ordinary deletion isn’t sufficient. [snort]

After escaping (surprise!) they split up: Rose and Pete enter the factory to rescue Jackie because, with all of London walking inside to be immediately upgraded, it’s highly likely they’ll be able to a) find her and b) rescue her before she’s turned into a cyberman. Yeah, right.

Mickey and Jake sneak into Lumic’s dirigible to destroy the cybermen’s communication network.

The Doctor and Mrs Moore climb down into tunnels lined with cybermen who are dormant – why dormant? Oh, wait, suspense, obvious activation, pursuit etcetera.

The cybermen are obviously zombie-types because THEY WANT YOUR BRAINS and they clomp, clomp, clomp, shambling like a zombie horde. At one point in their pursuit the zombies – oops, CYBERMEN – walk into a street, turn and STOP as if they’re about to start performing a Village People number. Very camp.

One wonders why the earplugs that control people in the ‘Age of Steel’ weren’t activated to avoid silly confrontations and chase scenes in ‘Rise of the Cybermen’ but then, this is Doctor Who. The creators aren’t aiming for plausible plots and sensible storylines, ‘just plausible deniability’ says the minion.

After Simon Pegg played an evil albino in The Long Game (season 1 of New Who), I started noticing more that Doctor Who uses ‘othering’ stereotypes for villains. The only person in a wheelchair in this two-parter is the villain. I give DW credit for including Mickey’s ‘blind’ gran although she’s also done badly as a blind person (dark glasses inside, groping about trying to hit Mickey with her WALKING STICK (no mobility cane) etcetera and she’s violent, hitting Mickey. This story made me start thinking of all the times Doctor Who has used disability to create villains; has there EVER been a character in Doctor Who in a wheelchair who was NOT a villain? How many characters with disabilities feature in Doctor Who? Please let me know.

Overall I liked this as a genesis of the cybermen story, reinventing the cybermen for a new generation who won’t sit still for the pacing of William Hartnell stories, black and white TV with cheap costumes and antiquated special effects. However, this story needed work; as a first draft it was commendable. As a family-oriented cyber-zombie story it was good.

I’m giving this one