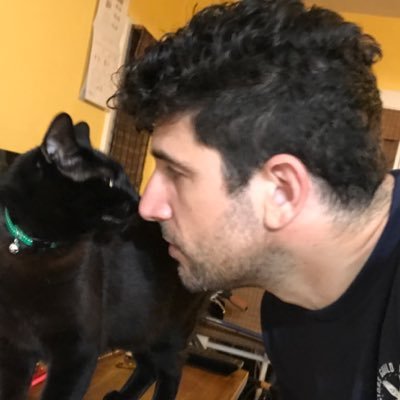 In New York City, Adam played electric sitar in the subways and explored various forms of art. Then he gave away his musical instruments and moved to Los Angeles to become a filmmaker. As you do. He’s made several music videos and has been expanding into graphic novels and movies.

You can find Adam Egypt Mortimer

How do you go from busking to filmmaking?

What inspired your graphic novel Ballistic?

You worked on Some Kind of Hate (2015), you directed a chapter of the anthology film, Holidays (2016), which was the opening film of the 2016 Tribeca Film Festival’s Midnight Section. And you worked on Daniel Isn’t Real (SWSW 2019), another horror movie. What did those experiences teach you?

How did you join those projects?

Your latest release is Archenemy (2020), a movie that weaves your love of music, graphic novels and speculative fiction together. Archenemy is directed and co-written with Luke Passmore. Please tell us about this movie and its inspiration.

One of your stars is Joe Manganiello who also moonlights as a consultant for Dungeons & Dragons. And he writes content for their adventure modules as well as working on an upcoming graphic novel series. Plus he has a heavy-metal inspired streetwear line Death Saves. How did you entice such a busy man to work on your project?

Your other star is Zolee Griggs who is known for Bride Wars (2009), Adam Ruins Everything (2016, TV series) and Wu-Tang: An American Saga (2019). Zolee spoke passionately about the complexity of characters and social issues in Wu-Tang. Did you entice her to join your project with the similar issues in Archenemy?

What movies and graphic novels inspire you?

What is next for you?

Archenemy is an interesting movie with echoes of Legion (the TV series) and Through a Scanner Darkly (the movie). Fans of Star Wreck: In the Pirkinning and Iron Sky will probably enjoy this movie.