A long, long time ago I’d never really registered that there was a personage out there called Joss Whedon.  I’d heard of Buffy and Angel but I hadn’t watched them at all ever, because I don’t like horror and, after all, vampires and demons are horror, right?

I received a catalogue from Atlantic Video (I was living in Adelaide at the time).  This catalogue advertised a series called Firefly, the entire series, for under $30.  It was advertised as a SF western, it sounded interesting and I was starving for SF.  I talked hubby into driving across town to buy Firefly.  We watched all of Firefly through, a few times, and loved it.  We couldn’t believe this unknown series was so unknown and so cheap. 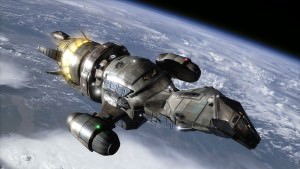 The Serenity is a Firefly-class ship

A while later I read an article in a student newspaper at university about Joss Whedon and how his work, especially on Buffy and Angel, was the topic of so many academic study groups.  Hmmm… this got me thinking.  Okay, this Joss guy did Firefly and he also did Buffy and Angel… maybe Buffy and Angel were worth giving a try.

Sourcing the DVDs from rental video stores was a problem.  We managed to find some of them, but some – entire seasons in fact – had been stolen.  All the best episodes were not available for rent from ANY video store anywhere near us.  Well, we figured, we liked what we’d seen so far and those episodes apparently weren’t the best because they hadn’t been stolen.  Okay… time to fork out some hard-earned cash to purchase Buffy and Angel.

So.  We watched Buffy and Angel from beginning to end.  Just a coupl’a times, you know?  Then a break, then a couple more.  We totally understood why Joss Whedon’s work was a favourite with academia as supported by this study.

A while later Serenity came to the cinema.  We were among the first people we knew to watch it.  Friends who knew we like SF would make a point of telling us we had to see Serenity, to which we would tell them we already had.  Then we’d be told about this great secret that was the TV series that came before, as if this was a secret that he/she/they had personally discovered.  We took great delight in telling people we’d owned it for years – and paid less for it than they had.

Then we moved to Melbourne and discovered the Browncoats, Can’t Stop the Serenity and more.

It was shortly after moving to Melbourne that I heard about Dr Horrible’s Sing-a-long Blog.  How awesome was Neil Patrick Harris as Dr Horrible trying to take out the ‘good’ (squicky) Captain Hammer, change the world, rescue the girl…  *sigh* I haven’t watched Dr Horrible in months.  I think I need to watch it again today. 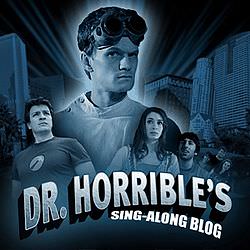 When I finally tracked down Dr Horrible I loved it, but then people were saying ‘Have you seen Commentary?’  I watched Commentary the Musical.  This is one of those rare times the commentary may actually be better than the feature, but the commentary is best watched after the feature as the commentary spoofs the feature.  I think hubby’s favourite song is the one about Zack – don’t tell him it’s a musical because he might kill us all.  For me it’s a toss up between Maurissa’s song about no-one wanting a ‘yellow’ heroine (also put disabled into that box!) or the one where Joss sings about people dissecting art and films (former art student here!)

A few people brought Dollhouse to our house for a SF afternoon & evening.  I’m pretty sure the episodes were cut because they were copied from a source that had – eh hem – deleted portions to replace with *other* stuff.  Also, being a social event, people were talking through the episodes, which made it difficult to follow the finer nuances of the plot arc and character developments. I purchased the DVD boxed set from the Browncoats stall at Supanova recently, so after we finished watching Deadwood we started on Dollhouse and we’re loving it.  It’s the subtlety, the finer nuances… I wonder where Joss was planning to take the series and what he would have done if execs hadn’t interfered…

I haven’t really read Joss’ comics – it’s the vision thing.  I’m trying to find a solution so I can start collecting and reading comics long term as I love art (more about this soon in my Life blog).

My most recent Joss event was The Avengers.  After a few weeks of hearing about how fabulous it was I finally got to see it.  We-ell… it was a comic book series brought to life.  In that, I think the Avengers was very successful.  In terms of a movie that holds its own, with strong female characters and depth of story-telling – meh.  Bechdel test fail: I don’t think two named women characters have a conversation at all, let alone a conversation that isn’t about and doesn’t include men.  I was hoping for some added depth or meaning just because it was Joss.  This is a case where my expectations resulted in disappointment, but if I’d gone in just wanting light-hearted escapism I would have come out saying ‘Wow!’ like nearly everyone else.

I’ll continue to watch Joss’ career with interest, hoping for more Buffy and Firefly-like projects.  I, like many other academics, love dissecting and discussing Buffy and Angel, so the findings here are no surprise.