A fairy tale unfolds in contemporary England… Taryn Cornick wrote a book about library fires, burnings and conversion to toilet paper. A footnote about a box dubbed “the Firestarter” included in her book sets events in motion. Demons want the Firestarter. The Sidhe want the Firestarter. Taryn wants libraries to prosper and stop destroying irreplaceable artefacts in the name of “efficiency”.

And this is just the bare bones of an epic – an ABSOLUTE – plot involving the death of a sister, revenge, grief, and so much more.

Knox is a New Zealand author with, I believe, a UK heritage. The Absolute Book is mostly set in the UK and in the Sidhe (Irish and/or Celtic fairy) realm. A story steeped in history revels in this setting with a protagonist whose family history connects them to the Sidhe over centuries.

However, this is not a white book. A key character – Shift – has an Arab-like appearance. When police discuss policing, one makes the acerbic observation that Shift’s appearance factors in to the decision to keep him under observation.

Knox does not make a huge song-and-dance about ethnicity of various characters. I gained the impression her characters are as diverse and historically accurate as prescribed by the most awesome history lesson I ever experienced: The History of the World In 100 Objects.

Taryn’s family history is not limited to essential world-building. She had an older sister who suffered men’s attention even as a teenager. There were EVENTS. Then, one day while jogging, a man deliberately hit her sister to incapacitate her for raping purposes but she died.

The family was devastated. The girls’ mother died a few years later of cancer. Loss after loss.

The Absolute Book is the story of the hunt for a particular book but it is also Taryn’s story of loss, grief, and healing. There is an emotional “hero’s journey” as well as the plot-based one.

The speculative fiction genre is frequently self-referential, with a history of authors “talking” to one another through subsequent books and articles. Often stories feature gratuitous but fun references to other stories, sometimes popular ones but often also obscure ones for “trufans” to celebrate.

The Absolute Book takes this to a level only previously experienced (by this reader) in the Absolute Sandman. But then, this is a book about books and libraries.

I started a list of references. Early in the story, Knox mentions the following books and authors:

And then I stopped trying to list books mentioned so I could focus on the story. Suffice to say The Absolute Book celebrates books and mourns their destruction.

The first time I read a book with specifically UK fairy tales I had a sense of “these are MY stories, the stories of MY tribe/ancestry”. The Absolute Book creates sense again as an adult. It’s complex, layered, with a race to the goal and twists and turns along the way. Taryn’s emotional journey is a gift to all who struggle with their own grief and yet it does not dominate the narrative. I highly recommend The Absolute Book.

Last year I interviewed Elizabeth Knox as part of the Authors For Fireys fundraiser. That podcast is here and on all good podcasting platforms. Also, Elizabeth will be visiting us again soon! 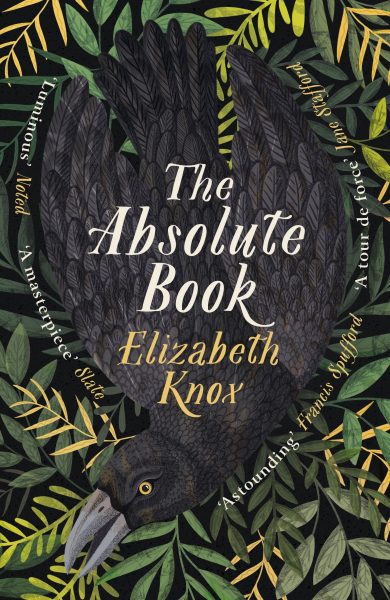