A warlock in the 6th century is wild – or, in this case, Wyld – and unkempt. He’s also committed offences so grave he’s about to be executed. However, the princess pleads for his life, begging her father to commute his death sentence into a 7-year sentence to purgatory. The only problem is that the so-called “wizard” (allegedly good male magic user) is brash and semi-competent at best. Merdyn the Wyld enters the River of Time instead of Purgatory, only to find himself in the 21st century. Thus he becomes the titular “Wizard in my shed”.

Rose is having a bad year and she’s not even 13 yet! First her father died. Then her family had to move house and schools because they couldn’t afford the old house. Rose’s mum is seriously depressed. So Rose feels isolated and alone. Plus she doesn’t have any friends at her new school.

Then she has a red hot go at the school talent competition. If her goal was comedy, she would have been a winner. The problem is, she was trying to be a serious singer.

Merdyn and Rose meet in the woods after they’ve both had Very Bad Days. Very Bad Days that will give you a chuckle – or have you laughing uproariously.

Merdyn wants to return to his own time. Rose wants a singing spell so she can sing like her mum used to. So then maybe the family would be happy again.

You had me at “Paddington 2”

When I read the blurb for this book, they had me at “from one of the writers on Paddington 2” because I love those movies. Everything about them. The pop culture references, the comedy, the pathos, THE HEART.

The Wizard In My Shed has all of that in spades. Clubs, diamonds, AND hearts.

Rose has a guinea pig with character.

I laughed. This is a fabulous quote.  I will refrain from getting on my favourite soapbox, that of REPRESENTATION. I’ll just casually leave this link here, that lists all mentions of the word “representation” on DMZ.

And Bubbles’s propensity to poo constantly and, when not pooing, to wee, will have kids in stitches.

My only criticism of this novel is the representation of depression and women used for comedic and plot purposes. Rose’s mum, Suzy, is depressed – not grieving, it’s labelled depression – so she lies on the couch all day eating junk food. She has lolly wrappers in her hair and must, by all accounts, appear and smell disgusting.

Then as soon as Merdyn shows up, a man who looks a bit like her deceased husband, Suzy is motivated. Suddenly she’s showering, going to the hairdressers, looking after her daughter… No problem with depression, at least not until there’s not a man in the picture any more.

Yes life is hard when you’re depressed. At least 1 in 5 people will suffer depression to some extent throughout their lives.

However, if a man “fixes” a woman’s depression, either the “fix” is temporary or she wasn’t depressed, she has other issues. And a man walking into her life could well bring out A LOT of other issues.

Some readers will say I’m overthinking it, that the Wizard In My Shed is a comedy and one for kids and families at that, so we shouldn’t worry about representations like this.

My response: this book gives children and families some pretty toxic messages. Surely there was another way to have a similar story arc for Mum? Have her be a hard working single mum struggling with daily life, always exhausted, then someone steps in, supporting, admiring, AND HELPING.

Powell’s illustrations are fun, adding to the comedy although  this is a “word focused” book not a picture book as such.

The text has odd changes in font and size, all of which are intentional. As a vision impaired reader, I found this disconcerting but, thankfully, there isn’t much in the way of italics. Therefore the text is still fairly easy to read, as long as it’s big enough for the reader.

Merdyn the Wyld, Rose and her family are fabulous fun. While reading I visualized the Wizard In My Shed as a Paddington-type movie, which increased my enjoyment of this novel. I hope it’s made into a movie too, but just change that one thing.

The representation of the mum and depression was the only fly in the ointment.

However, I still highly recommend this novel. The Wizard In My Shed is part Catweazle, part Horrible Histories, part Maid Marian and Her Merry Men, part Paddington and a whole lot of fun. I’m giving it 4 out of 5 stars.

(I did not know how old Catweazle was, I first saw it about 1980! TV shows came to Tasmania very late and then were repeated ad infinitum.) 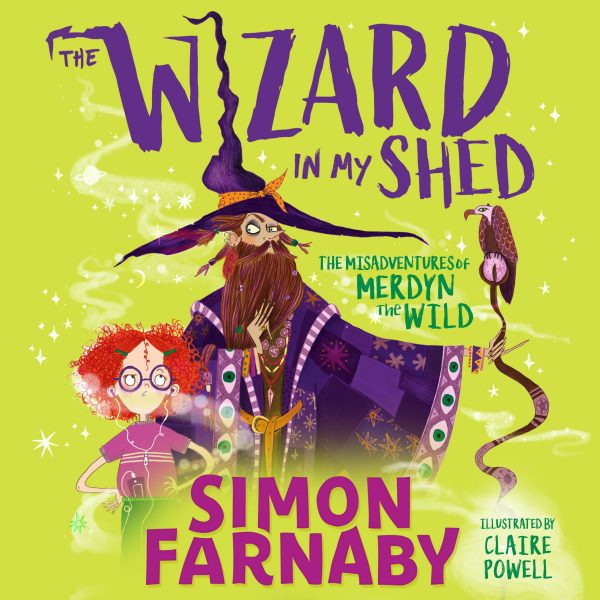