Elizabeth Knox contributed to the Authors For Fireys fundraiser in January 2020. This mammoth undertaking was organised by Emily Gale and Nova Wheetman. They raised $513,149 to support firefighters and to help Australia’s bushfire survivors.

My interview of Elizabeth is here and on all good podcasting platforms.

Elizabeth was a guest on Dark Matter Zine’s podcast; the interview is here and on all good podcasting platforms.

The best way to meet Elizabeth Knox is to listen to her on the podcast, but here’s the short version. Elizabeth has been a full time writer since 1997. She has published twelve novels and three autobiographical novellas and a collection of essays. Her best known books are The Vintner’s Luck, and The Dreamhunter Duet. (Dreamhunter and Dreamquake). Her latest isThe Absolute Book. Elizabeth has an ONZM, is an Arts Foundation of New Zealand Laureate, and won the Prime Minister’s Award if Fiction in 2019. Elizabeth teaches World Building at Victoria University and lives in Wellington, New Zealand with her husband, Fergus Barrowman, and her son, Jack.

Although Jack Barrowman predates Captain Jack, played by John Barrowman, it is a source of amusement.

I am a novice card maker but I made the pictured card. This is a thank you to Elizabeth Knox for appearing as a guest on Dark Matter Zine and for supporting Australia’s firefighters. 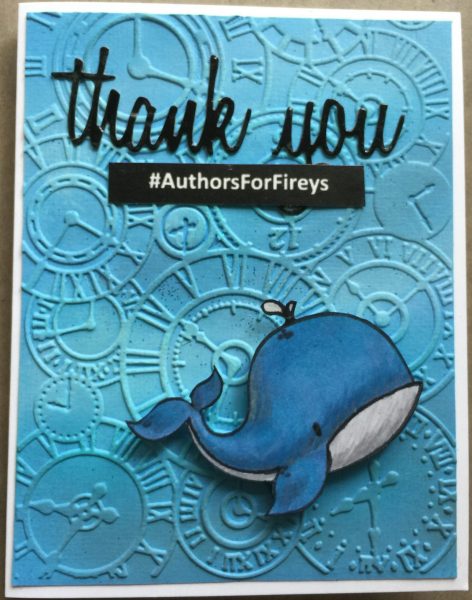 By the time I made this card, I’d had a little practice and was getting a bit bored with trying to make the Crazy Cats, Crazy Dogs and Crazy Birds work (with varying degrees of success). A new bundle of craft supplies arrived in the post (not from Amazon).

While sorting through the bundle and trying to figure out where to put everything (my apartment is tiny), I found a pile of stuff I’d made late last year and put away. This included both the whale (already colored) and the background (already embossed with the clocks).

I decided to use the pieces I’ve already made. Perhaps I have a twisted mind but, seeing a pile of sea creatures next to the embossed paper I suddenly thought ‘a whale of a time’! I used ink blending to give the impression that the clocks are in the sea or are part of the sea. If the Starless Sea can have a sea made out of confetti, surely it’s acceptable for whale to swim through time?

Have fun and stay safe.