A Merry Little Meet Cute has at least one identifiably disabled character: Noah’s mother has bipolar disorder*. Noah’s mom has a name, which eludes me right now. One of Noah’s friends called her Mrs K, so I’ll stick with that.

The authors don’t discuss bipolar’s features or how it explicitly affects Mrs K. Instead they present her as a person with agency, who’s had a positive impact on lives around her. But they’ve also presented her as a person who goes through bad patches, who needs medical supervision and medications. Which also involves the American health system, one of the world’s worst.

In the early 90s I learnt that a very good friend of mine had bipolar. My understanding at that time was vague but aligned with the presentation in this book. It was later that I discovered more of my friends had bi-polar, some were in and out of hospital, including suicide watch. And they kept that secret right up until one, Fiona Clark, suicided while on suicide watch in a psych ward. Between that and my counselling studies, I suddenly learnt a lot about bipolar disorder.

A Merry Little Meet Cute portrays Mrs K, her struggles, and the impact on her family with sensitivity and respect. Kudos to the authors.

A Merry Little Meet Cute is body-positive and sex-positive. Healthy sex lives are, on the one hand, kept secret because Hopeflix while judging Hopeflix is a thing. And Hopeflix’s “morality clause” in the contract causes much ado about nothing while the importance of being earnest is a thing. Pardon the very bad puns.

Bee and Noah are both bisexual. This affects who Bee will have sex with for work as well as who she’s attracted to in real life. Noah’s reputation evolved from who he reputedly had sex with back in the day, much of which was true.

Around the time I read A Merry Little Meet Cute, I watched Christmas with the Campbells, directed by Clare Niederpruem. The timing was hilarious. When I researched Clare, I discovered that this Christmas she also has a Hallmark movie out, A Royal Corgi Christmas. These stories are on a spectrum where Royal Corgi is at the squeaky clean end, Campbells is in the middle and – if Meet Cute was a movie – it’d be R rated.

But that’s not all.

During my podcast interview of Clare, I wished I could talk about Meet Cute, ask about the dynamics of working with Hallmark, and so much more. However, I doubted Clare had read Meet Cute as it’s barely out. And we only had a 15 minute time slot anyway. Her publicists – as with the publicity for a lot of the film-related interviews I’ve been doing – organise interviews on a military-like schedule. There’s no room to shoot the breeze and explore in depth. Maybe one day.

But the dynamics of all this were fascinating and delicious.

At this time of year I tend to read and watch Christmas-themed romcoms. So A Merry Little Meet Cute sounded like just the book to get me started. Admittedly the romcoms I usually enjoy have less graphic sex. This novel made me think of some Carry On movies that started while I was in the room as a kid, and ended while I was enjoying a good book.

(I was in primary school! And no, I’m not THAT old, they were repeats. Or they just took 10 or 15 years to be shown on TV in Tasmania.)

How to sum up this story?

A Merry Little Meet Cute is, in its way, just as surprising and subversive as John Grisham’s Christmas with the Kranks. It’s wholesome and life affirming, about community and family… while also challenging expectations and norms. Body positive, sex positive, with excellent representation of disability, I highly recommend this novel. 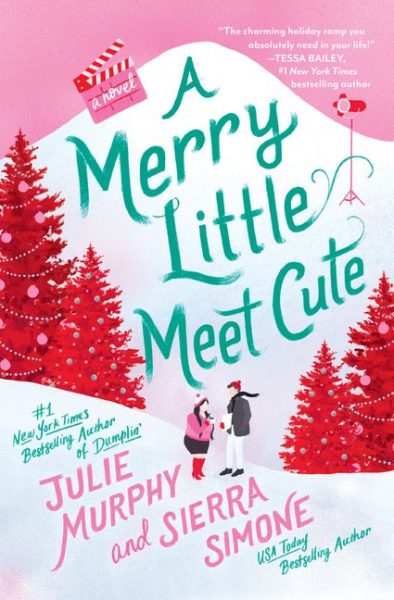