Rather than delving into the detail of ‘A Free Ranger’, today I’ll talk about 3 items arising from the episode: slavery arising from a refugee camp, a corrupt frame-up and symbolism (comparing the Containment Authority logo to that of the Aboriginal and Hairy community).

In the previous episode, Araluen (Tasma Walton) lines up with two other Hairy women. A guard stands by. A white woman inspects them. It becomes clear she’s looking for a slave. She chooses Araluen. The guard shoots the other two women because what better way to keep a secret?

Typical. The pastor who conducts a 7-part series on sexual purity regularly uses sex workers. Homophobics are, like the Orlando shooter, struggling with their sexuality to a lesser or greater degree. And the minister for persecuting a minority group gets off on getting off on that minority group.

Later Araluen cries quietly. We don’t see the sex scene at all. YAY! Cleverman is not another sexually abusive Game of Thrones! However, the implication is clear: Araluen is a sex slave and has satisfied a client to her personal cost.

Zana Fraillon, author of The Bone Sparrow, remarked that slavery is a known problem in Australia (interview coming soon). She recalled media articles about asylum seekers disappearing from an internment camp here in Australia, alongside concerns they may have been abducted for use as slaves. Just today I read a news article about a massage parlour in Canberra, Australia, mistreating Filipina women, including locking them in overcrowded housing and forcing them to return significant amounts of money to their employer.

Slavery is a problem in Australia.

Back to Cleverman: Latani (Rarriwuy Hick) is a 15-year-old Hairy trying to find safety. An older white woman feeds her, gives her a forged ID and contact lenses to conceal her identity but she’s still at risk. Latani walks into a hair dressing salon while hiding from the police. One of the hairdressers hits Latani over the head and knocks her out. Both hairdressers agree to sell her on the black market. She escapes then takes another risk in following a stranger who offers to help her get into the Zone without passing through a security checkpoint. Ironically, if she went through the checkpoint to get into the Zone, she’d be imprisoned for being outside the Zone.

Again, slavery and worse is a risk for Hairy people.

The head of the Containment Authority prison arrives at work to view the security guard killed in the previous episode.

In ‘A Free Ranger’ we learn that Waruu struggled with the guard and, after squeezing him until he passed out, Waruu broke the guard’s neck, presumably to prevent the guard identifying Waruu.

Head dude, acting in his commercial interests, takes a knife to the corpse. I figured he was going to put pretend claw marks in the corpse but, apparently, he cut out the guard’s heart to mimic the previous two deaths (a copycat) and then used the guard’s blood to paint the resistance logo on the wall above the corpse.

However, that little knife would not have been able to crack ribs like the previous murders. Did he ineffectually mimic the murders, leaving tells that the authorities covered up? Will investigations reveal the truth? Is this a hole in the plot? We’ll find out later.

Today, the last day prior to Australia’s 2016 federal election, Peter Dutton, Minister for Immigration and Bas—[cough]—Border Protection, linked asylum seekers with terrorists in an attempt to encourage people to return the current government. Apparently the government is so incompetent that they can’t trace refugees to their place of origin unless the refugees are carrying non-existent or inaccessible paperwork but we should totes vote for the government anyway.

Don’t get me started on how one refugee having a flat-screen TV apparently justifies rapes, beatings and refusal of essential health care, all part of the service provided at Australian taxpayers’ expense. Not relevant to Cleverman? We’ll see. Back to the story.

The logo for the Containment Authority is two interlinked letters, C and A. While I was trying — and failing — to decipher the logo, I thought it looked like two links, perhaps two links in a pair of handcuffs. After realizing what the logo was, I applaud Cleverman‘s design team for a plausible logo with sinister overtones.

The Aborigine and Hairy community’s logo is two hands interlinked as if they’re gripping one another, forming a human chain. Nice.

Even more powerful is the similarity of both logos: the CA logo is a twisted version of the community logo. Perhaps a virus warped its DNA?

Cleverman layers issues within the overt SFF (science fiction/fantasy) narrative: it explores current social issues concerning treatment of Australia’s Indigenous peoples, Maoris and the Hairies who are allegorical refugees. Within that framework, issues are raised including, in ‘A Free Ranger’, slavery and corruption intended to scare the public. Cleverman is THE television series to watch in Australia at the moment for good reason. 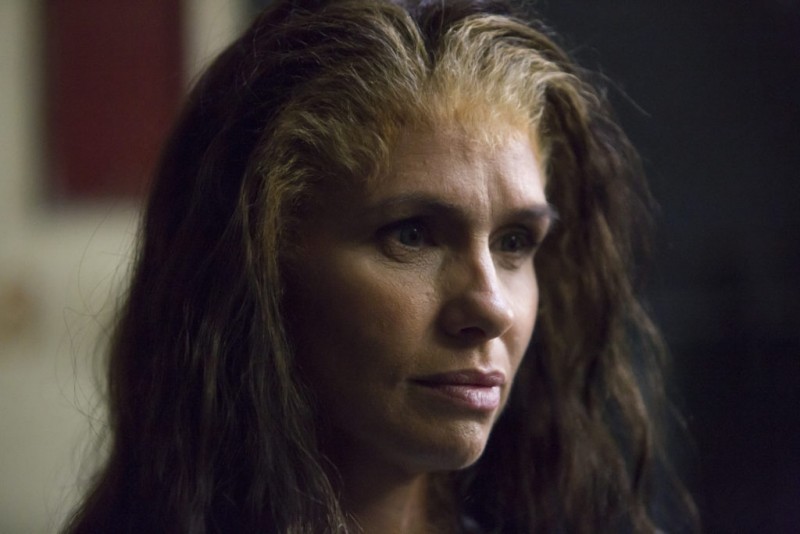