Kell is a magician from Red London who travels between three parallel worlds, some of which have magic and some don’t. He takes messages from his king to the monarchs ruling parallel Britains. While on his errands, he smuggles illegal artifacts between worlds for his own personal collection in spite of the risks.

Lila fancies herself as a pirate in Grey London’s Regency era, stealing to save money for her own ship. She sees magic although she shouldn’t be able to. Her ability gets her into trouble with Kell although Kell is too arrogant to perceive Lila’s ability.

The evil rulers of White London, the London closest to embargoed Black London, are trying to take over the world so they send their magician after Kell. Repeatedly.

Right from their entrances, Kell and Lila are obviously destined for a romantic entanglement.

Schwab gets a pass for the Bechdel Test because Lila encounters a woman merchant and purchases clothing from her, for which I have no doubt THERE WILL BE CONSEQUENCES. Considering Lila is a female point of view character, women could have contributed more significantly to the plot, raising the Bechdel bar a little. However, apart from Lila the only woman who plays a significant role is an evil twin who co-rules White London, the monstrous feminine acting as the obvious Jungian ‘shadow’ to the heroine.

A darker shade of magic is a fantasy story that reads like a faery tale, complete with a fae underworld, although Schwab’s story is about humans with and without magic who live in parallel.

This novel is sufficiently original that I didn’t get the feeling I’d read it before. When I read Trudi Canavan’s first trilogy, it felt so familiar that I checked the copyright date to see if I’d read it as a teenager. It wasn’t that old but I was unsurprised when that blank space on the map near where bandits lurked was the hidden city/refugee for women and other dispossessed people. This is a problem when you’ve read as much and for as long in the genre as I have, however this wasn’t an issue with A darker shade of magic.

My biggest criticism of A darker shade of magic is some of the prose. The number of instances when characters reacted instantly became instantly irritating — after about the 3rd or 4th time in quick succession. Otherwise, Patrick Rothfuss and Helen Lowe’s novels it ain’t, but A darker shade of magic was eminently readable and sufficiently enjoyable for me to recommend as the literary equivalent of, say, milk chocolate. Not my fave but it’s still chocolate. 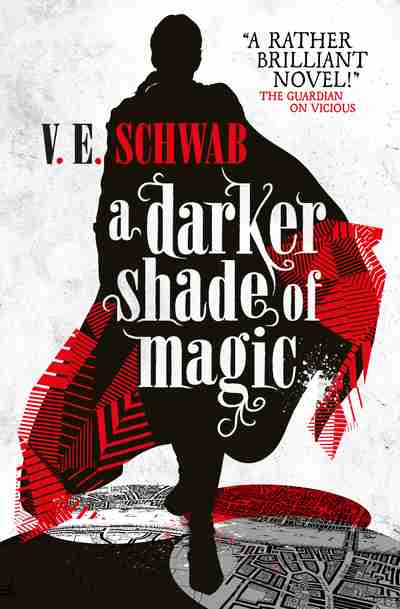