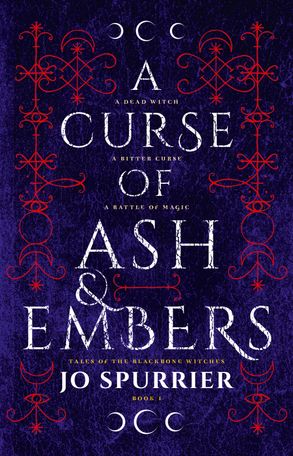 A Curse of Ash and Ember is book 1 of the Tales of the Blackbone Witches.

Elodie is restless; she’s a prisoner in her own home, a regular Cinderella at her stepfather’s whim. She dreams of leaving then, one day, her mother receives a letter summoning Elodie to service at Mistress Blackbone’s in the mountains. Although they’d never heard of Mistress Blackbone and didn’t recall seeking a position for Elodie, her parents arrange for her to leave with a friend of the family.

After a lengthy journey by cart — this is a medieval rural fantasy — then a lengthy walk, Elodie arrives at Mistress Blackbone’s cottage, only to sleep on the porch. When Mistress Blackbone (Aleida) arrives home, she’s in no condition to manage a cottage and is uninterested in a servant girl. However, Elodie is determined not to return home as a failure.

Nightmares begin, a romance with a strange youth, and the beginnings of a community build around Elodie, not unlike the village of Lancre’s relationships with Sir Terry Pratchett’s Discworld witches.

A Curse of Ash and Ember is a story complete in itself, an episode in the Tales of The Blackbone Witches; in this instalment, the witches face a shade, a zombie and a dread enemy seeking to imprison a dryad. This novel is part Blackthorn and Grim but with two girls, one aged 16 and one in her twenties with contrasting backstories, both still learning their craft. A thoroughly enjoyable read, highly recommended for fantasy readers; fans of Terry Pratchett’s witches, including Tiffany Aching; and fans of Blackthorn and Grim willing to read younger characters. I look forward to watching these characters develop while having more fantastical and horrifying adventures. If you’re looking for a Halloween #halloween read, look no further!