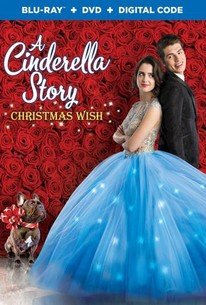 Kat (Laura Marano, Heroes) is 17, hanging out for her 18th birthday when her stepmother says she might (if Kat is a good girl and does all the things Cinderella is supposed to do) release her trust fund. Meanwhile, Kat is writing and singing songs (autotuned to fuck, disappointing), working as an elf and doing singing telegrams in her spare time. When she arrives home, she has to clean up after her lazy stepmother and two stepsisters. Her Christmas wish is to succeed with her singing and songwriting career.

Dominic Winters (Greg Sulkin, Runaways) is a poor little rich kid with a hugely supportive father to whom he never confides. He hangs with some reprehensible characters, which reflect poorly on his life choices. But apparently his choice in dickish friends is not a reflection of his personality. Nor have they rubbed off on him. WTF?

Joy, the eldest stepsister, has an Instagram account that she uses — after pushing Kat to the ground and spilling her drink — to make Kat/Cinderalla a social media meme. Dominic helps Kat to her feet before his Bitchy McRestingBitchface friend humiliates Kat with some elitist bullshit comment about wearing ‘knock off’ boots instead of Prada or Gucci. Because we all totally wear EXPENSIVE name-brand boots all the time unless we’re totes poor, amiright?

Next time Dominic and Kat meet, he’s in full Santa regalia and she’s in her elf costume. And, like Superman/Clark Kent, a single curl and glasses conceal their hidden identities.

A Cinderella Story: A Christmas Wish is a Netflix movie walks with one foot in rom-com and the other in pantomime, never quite deciding which to choose. It’s WAY over the top, good with a glass or two of wine and some mindless romantic entertainment during this oh-so-sappy Silly Season. However, I’d like to smack the person who decided to autotune voices until they sound like a cheap electric piano. I’m giving A Cinderella Story: A Christmas Wish 3 out of 5 stars.

The audience gives it 48% on Rotten Tomatoes and there aren’t any critic scores.