Alex has left home, his marriage is in tatters, his son is unable to engage. While Alex holes up at his best mate’s, Dan’s, flat, he’s confronted with ripples of the past affecting the present: Alex’s brother, George, was killed outside their primary school’s gates. Filled with self-pity and blaming his son’s diagnosis (‘autism’) for his marriage failure, Alex goes through the motions of what is fairly typical male abandonment: he opts out of the marriage, he opts out of seeing his son, he focuses on work and then he feels sorry for himself when his wife says she’s had enough.

It’s not. And this is a good thing.

It’s all about the father

A Boy Made Of Blocks is really a story about the father, Alex, how he demonized ‘autism’ as the cause of all his woes instead of grieving for his brother and getting his shit together.

This is why A Boy Made Of Blocks is So. Fucking. Awesome.

I approached this novel with caution because “nondisabled author”. Too often books are written by non-disableds about how to fix disableds; books are written by non-disableds about how inspiring disableds are or how disableds are to be pitied. Stuart avoids all those tropes and writes an emotionally engaging story about a father, Alex, encountering the difficulties associated with parenting a child with a disability, yes, but he also learns that some of this shit is normal parenting. IT HAS NOTHING TO DO WITH DISABILITY. Also, many of the problems are Alex’s and are nothing to do with disability. This is a revelation for Alex.

Most ‘marriages’ (read: intimate couple relationships) fail when a child has a disability and, often even when the child doesn’t have a disability, men opt out of parenting their children after they separate from their partners. Also, many couples who separate regret separation after the fact, regardless of whether they reunite. Alex goes through the normal grieving process, grieving for his marriage, grieving because of his son’s disability increasing his vulnerability, and that triggers his grief for his brother.

A Boy Made Of Blocks gave me all the feels, laughter and tears. I cried during the climactic scene because it was so beautiful (the climax isn’t sad). I’d love to talk about this novel in greater depth but I want you to read it so I’m not going to spoil it. A Boy Made Of Blocks is not just about disability, it’s about feeling stuck in your job, life, grief, marriage, intimacy, spending fun time with kids, IT’S ABOUT PEOPLE AND RELATIONSHIPS. Go. Go now. READ THIS BOOK. (Said in the voice from ‘Robot’ on Doctor Who: echo-y and commanding.)

Please note: I don’t know a lot about autism and I cannot speak for people on the autism spectrum but I feel reasonably confident they will appreciate this novel and the sentiments expressed by the author. However, to reach the good stuff you have to read past the first few chapters. 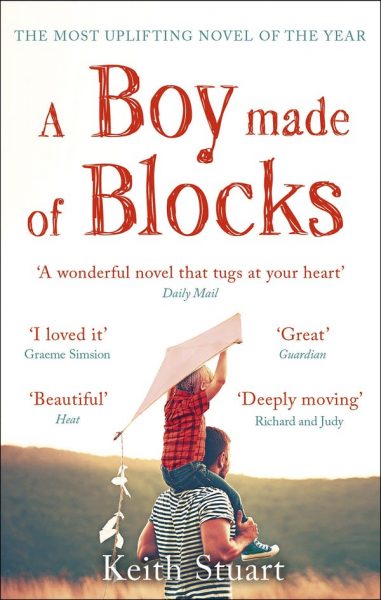