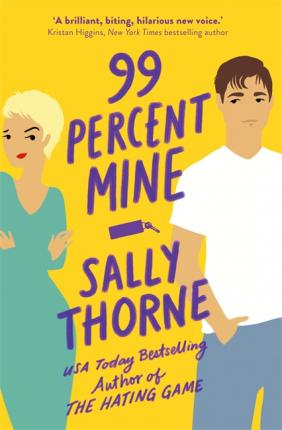 Darcy Barrett and Tom Valeska have known each other since they were eight years old, and Darcy has had a crush on him since then. Now Tom has broken up with Megan, his girlfriend of eight years, and he’s renovating Darcy’s grandmother’s house that was left to Darcy and her twin Jamie.

Nothing could possibly go wrong. Could it?

Darcy has a crew cut, tattoos and commitment issues  as well as a heart condition that complicates her relationships with her family. She also just wants to jump Tom’s bones.

Tom was the stray ‘adopted’ by the Barretts, who lived on the opposite side of the street. He’s always tried to be perfect so he won’t be kicked out of their dysfunctional family, but perfection, romance and twin issues aren’t a good combination.

As a trashy romantic summer read, 99 Percent Mine is fun. However, the combination of Darcy’s lustful focus on Tom’s physical appearance coupled with the vague descriptions of sex seem a bit incompatible. Don’t promise what you won’t deliver, in my opinion.

99 Percent Mine had loads of potential for character development and to be a 21st century Pride and Prejudice (especially with a character named Darcy who makes a reference to that tome), but falls short. I found that aspect a little disappointing, thinking about how, if I was only interested in how sexy my husband was when he was 23, his more — um — cuddly appearance at 50 would spell the end of the relationship. While physical attraction can be important (regardless of the physical TYPE), it’s really personalities that are the glue, and for that you need more of a journey. Having Tom’s point of view would have helped too.

99 Percent Mine is a light romance suitable for the beach but it’s not the type of story that I’m inclined to revisit.

Rating: 3 out of 5 stars.
Publisher: Piatkus