Larry (Jason Schwartzman) is content with his dog Arrow and booze, barely tolerating anything or anyone else. His marginally successful relationships include his grandmother, who keeps him afloat financially, and his best friend Norwood, who provides him with pharmaceuticals. But a chance encounter at a Jiffy Lube gives Larry a beguiling new boss and the impetus to head in another direction for a while. This movie showcases all that may be needed to help a person get unstuck in life: love (or an unrequited crush), friendship (or someone your family likes better than you) and family (or in this case a grandmother who will support you whenever you get fired from a job).

7 Chinese Brothers is excruciatingly slow-paced, focusing on minutiae and yet missing obvious potential when, for example, former co-workers break in to Larry’s house to wreak revenge.

Larry’s claim to comedy is to leap up on any surface, pretending to be a ‘fat man climbing out of a pool’. Over and over. And over again.

A co-worker tells Larry to steal from cars he’s detailing to pay the co-worker for the ‘privilege’ of working. Larry is nearly fired so he stops stealing only to be nearly fired for moving coins to the dashboard. Irony and drinking piss (literally) are the only aspects of the humor that I really got and neither evoked so much as a smile. Disgust, sure, but not a smile.

7 Chinese Brothers seems short on Chinese and brothers, however, I stopped my masochistic self-torture before it ended so there may have been some logic in the title late in the movie.

Some humor just flies past me; it doesn’t go over my head because it’s incapable of flying that high. This movie is in the shallow end of that comedic gene pool. 7 Chinese Brothers might appeal to people who love Wilfred (although some episodes of Wilfred were more intelligent) and some Adam Sandler movies.

48% of people liked it on Rotten Tomatoes so SOME people found it funny.

Rating: 1 out of 5 stars
Director: Bob Byington
Writer: Bob Byington
Stars: Jason Schwartzman, Stephen Root, Olympia Dukakis
Watch this if you’d like a cross between Everybody Loves Raymond (without a laugh track and with only 1 person at the core instead of a family) and Adam Sandler’s comedies 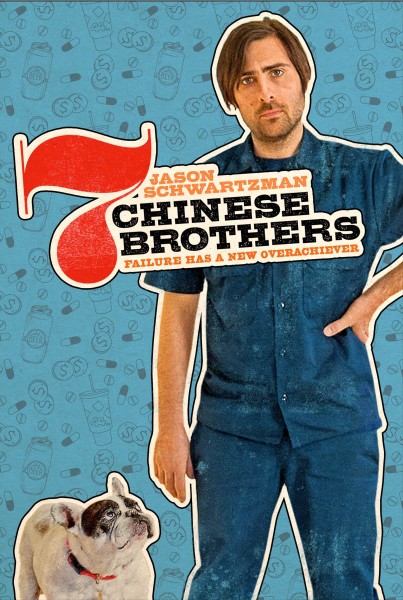