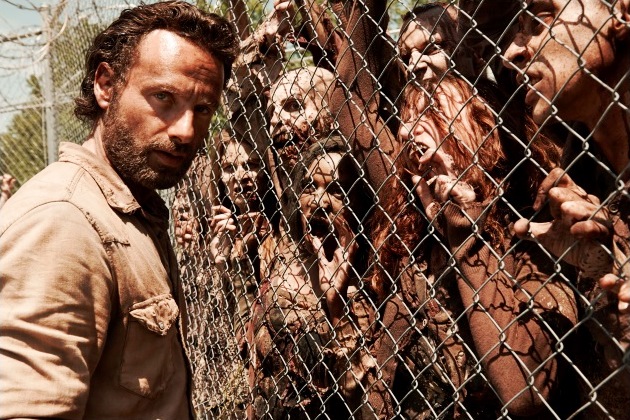 ‘30 Days without an Accident’ begins several months after the end of season three. The prison has more structures including vegetable gardens, sheltered outside eating areas and animal pens.

Tyreese (Coleman) and Karen (Martin-Green) have begun a relationship, as have Beth (Kinney) and new arrival Zach (Gallner).

Michonne (Gurira) returns from a scouting mission just in time to join Daryl (Reedus) and a group of volunteers on a scavenging mission.

Hershel (Wilson) tells Rick (Lincoln) that when he goes to check snares the council wants him to take his gun, revealing that Rick hasn’t used a gun since Carl’s murder of a boy at the end of season three.

While out checking snares, Rick finds a woman. She begs him to help her get a pig to her husband and tells him they haven’t eaten in days. She asks to go back to the prison with Rick and admits they have been doing badly on their own. Rick says he needs to meet her husband and ask them both three questions. When they get to the camp the woman attacks Rick. She admits she couldn’t live without her husband so kept his head after he turned into a zombie. She stabs herself so she can be like him and begs Rick not to end it. He remains with her until she dies and then leaves.

Two young sisters are at the fence talking to the walkers they have named. Carl (Riggs) tells them they’re not people or pets, but the girls maintain that the walkers are just different.

During the scouting mission, Bob (Gilliard) is shown to have clearly struggled with alcoholism. As he reconsiders and puts a wine bottle back, the shelves of bottles collapses and stir the zombies on roof. As the walkers stir, they begin to fall through the rotted roof. Beth’s boyfriend Zach is eaten by walkers in the chaos. The rest of the group escape.

Tyreese and Karen reunite after the failed run. Daryl tells Beth that Zack died. Beth tells Daryl she doesn’t cry anymore and is just glad she got to know him. Daryl admits he is tired of losing people.

The episode ends with Carl’s friend Patrick (Martella) clearly sick and showering fully clothed. He collapses in the shower and awakens as a walker.

There was so much happening in this episode and it was perfectly weaved together. One of my favourite things about The Walking Dead is the unseen time that passes between seasons. It allows the seasons to hit the ground running without having to remind everyone where the show was up to.

Carl is still one of my least favourite characters, but unfortunately I can’t hold out the hope that he will be eaten by zombies as I did with Shane and Andrea. I just don’t think the creators will be feeding the sheriff’s young son to the walkers anytime soon. However, I will be keeping an eye on Lizzie, the creepy girl who thinks zombies are just different and misunderstood. The writers proved with Sophia that no-one is truly safe, regardless of age.

Link to the wiki for the epdisode.