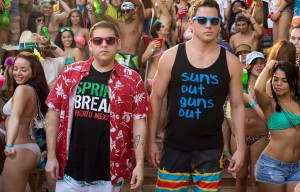 Schmidt (Hill) and Jenko (Tatum) are at it again! After a smuggled exotic animals bust goes awry, the duo are sent back to Jump Street to do what they do best – undercover student assignment!

This time around the partners need to bust the distributor of a hot new college drug while struggling with the distance that is widening between them.

I’m going to be honest with you, dear reader, because you deserve it and because I like my credibility intact. I didn’t laugh once during the original 21 Jump Street (2012). I saw it in the cinemas and have not seen it since. It was a decent movie, but it wasn’t something I found chuckalicious.

There were a considerable number of puns; a large number of pop culture references to other movies; a not-so-subtle play on words using a major cast member’s name; and a subtle nod to Tatum’s film White House Down.

22 Jump Street is one of the most reference-filled films I have ever seen that is not a straight-up parody movie. Some of the references and jokes did feel disjointed and as if they were square pegs hammered into a round hole but, generally speaking, the comedy flowed well with the story.

The chemistry between Tatum, Hill and even Ice Cube is evident throughout the movie, contributing greatly to the improvement of 22 Jump Street from 21 Jump Street.