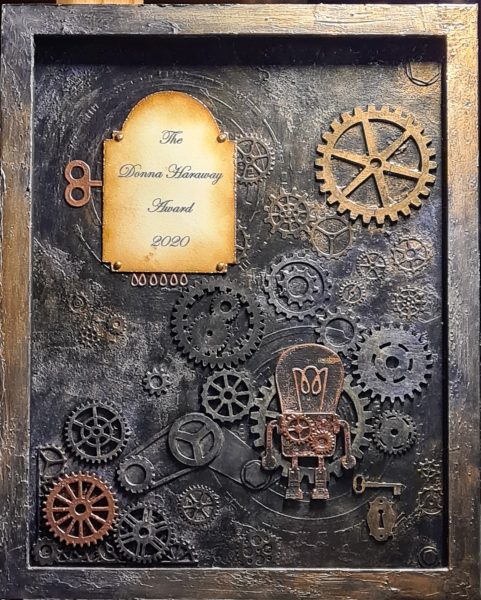 During the inaugural ceremony I confess I was SO stressed – especially after the Zoom fail so we switched to Skype after the ceremony start time – that I didn’t manage to communicate effectively. This impacted, for example, the reasons for giving John Birmingham an award for The Cruel Stars. In his acceptance speech, Birmo underrated himself and only acknowledged disability issues for ONE character. I was practically vibrating with nerves so didn’t manage to point out the complexity of his story, particularly regarding class issues and the dynamics of a cybernetically enhanced society. People without implants mostly saw themselves as disadvantaged and oppressed because poverty, but then there was a young royal whose fam forced her to learn the hard way. So, when the villains showed up, her lack of implants were a strength. Basically, it was COMPLICATED. And there were space Nazis who wanted to murder everybody as well. Anyhoo, that was 2020. There was more to that decision, but it’s been haunting me for 2 years so I needed to put that bare minimum out there.

In 2021 I selected the 2021 winners and, in April, was gathering the ingredients together to make the awards. Then the Diva, the Bigot and/or their allies told me I am not allowed to have an online presence because reasons. Long story short: I’m still recovering from those events and abuse heaped upon me at that time. So although the winners were affixed in my mind and my notes, I didn’t announce them.

The problem with awards

The problem with starting my own awards is that I don’t have thou$and$ to gift to others as prizes. So I decided to make my own awards. And, with shattered confidence, that’s been harder than ever. Hell, it takes me MONTHS usually just to mail out cards I’ve made people, let alone to make these awards.

In my opinion, nothing is too good or good enough for the winners I selected. So making awards that were sufficient, of which I wouldn’t be ashamed, has been bloody hard. Who am I kidding? I haven’t made the awards yet. I have materials, I have ideas, but I just about have a panic attack every time I try to start.

So I decided, late as it is, to announce the 2021 winners. And THEN to make the awards.

So, without further ado…

So. Without further ado, I will announce the 2021 winners of the CripLit Keys.

“Crip” is Disability slang for cripple, aka disabled. Not to be used by nondisabled people unless you’re the kind of nonBlack person who uses the “N” word.

“Lit” is short for Literature.

“Keys” are my term for these awards because good representation has the power to unlock doors, to help remove barriers that afflict disabled people.

The Donna Haraway CripLit Key is for the best representation of disability featuring a cyborg of some kind. The 2021 winner is Willow Moss and the Forgotten Tale by Dominique Valente. Not only is Willow Moss allegedly disabled and therefore reviled by many but there’s a pirate with a wooden leg who is far from a passive character. And there’s more. Although Emma originally reviewed the Willow Moss book, I read the first and second stories in the series in preparation for interviewing Dominique. I absolutely loved the stories too, even though – in theory – they’re much too young for me.

The Paul Darke CripLit Key is for the antithesis of Darke’s normality genre where the disabled person is removed at the end of the story, whether by death, assimilation under their own steam (society need not feel responsible), or geographical relocation. The 2021 Paul Darke CripLit Key is for The Extraordinaries by T J Klune that was published in Australia in 2020. Klune’s protagonist is disabled and has a superpower but the superpower doesn’t cancel out the disability. And, at the end of this novel, the protagonist is set to remain front and center. And probably having a romance and all that good stuff too.

The Stella Young CripLit Key for 2021 is for education without inspiration. I cannot think of a book that is less inspiring than The ScoMo Diaries by Tosh Greenslade (of Mad As Hell) and Andrew Weldon (Big Issue). Greenslade’s wit and parody of Australia’s former and disgraced prime minister, Scott Morrison, is excellent. If you loved Mad As Hell, you’ll ADORE this book. And Andrew Weldon’s illustrations enhance the narrative. The pair effectively and incisively eviscerate Scott Morrison and his thoughts on disabled people while educating. But, as an Adrian Mole/Wimpy Kid type book for adults, it’s far from inspiration porn. I had the privilege of chatting to the pair around the time of publication.

I couldn’t possibly develop a set of awards that celebrates excellence in disability activism without including my childhood hero. It seems appropriate for the Helen Keller key to be the “retro” or retrospectively awarded key. As such, I select one example of excellence in representation of disability that pre-dates the CripLit Keys. Doctor Who episode “It takes you away” wins the 2021 Helen Keller CripLit Key.

Hubby and I watched this episode together. Shortly after Hanne appeared, hubby said “I think she’s blind.”

We shrieked and bounced on the couch, this was SO EXCITING.

I googled to learn that the actor, Ellie Wallwork, is indeed blind and is the first blind actor to play a blind character on Doctor Who. Progress!

Hanne, Wallwork’s character, begins in the episode trapped and passive like disabled people in many stories. The Doctor passed judgement, as did her companions. Like with many other prisoners throughout the series, they free Hanne. But not before having an adventure.

At one point, Ryan gives Hanne his arm. He does not – as so many people do – seize hold of Hanne and steer her around. That’s assault even when well-meant. And, trust me, not everyone who lays hands on us means well.

The one criticism I have of the episode’s handling of blindness (without re-watching), was that Ryan told Hanne to put her hand on his arm instead of asking Hanne how he could help.

But still, 90+% for representation of blindness.

The Triantiwontigongolope CripLit Key is, in my mind, the ultimate award each year for representation of disability so I save this for last. It’s for the best representation alongside inspiring hope. The 2021 winner is Future Girl by Asphyxia. Asphyxia is Deaf as is her protagonist Piper who is living in a dystopian near-future Melbourne, trying to survive without petrol while living on goop some company makes millions selling to people instead of encouraging self-sufficiency. That is a lot on its own. But also Piper’s mother insists on Piper “passing” (for normal), not learning Auslan (Australia’s sign language for the d/Deaf) and isolating Piper from other d/Deaf people. So Piper’s hero’s journey is layered, complex and delicious.

Note: I asked the publisher, Allen & Unwin, if Asphyxia would like to be considered for these awards. They checked with her and apparently she said yes.

Now I need to make the awards… or just buy trophies and have them engraved. I’ll have another go at making them because I don’t want these to be generic and bland. So watch this space and watch Instagram for the evolution of the artefacts.

Stay safe. Don’t drive on flooded roads. Wear a mask. Do all the sensible things, so we can meet up again to celebrate excellence.