The 2020 CripLit Keys presentation video and podcast is here and on all good podcasting platforms. This post is about the award itself.

Donna Haraway wrote “A Cyborg Manifesto” and the Socialist Review published it in 1985. She uses the concept of the cyborg to reject rigid boundaries, particularly those separating “human” from “animal” and “human” from “machine”. The “Manifesto” criticizes traditional notions of feminism, particularly feminist focuses on identity politics. Instead Haraway encourages coalition through affinity. She uses the figure of the cyborg to urge feminists to move beyond the limitations of traditional gender, feminism, and politics.

Basically, if all the minorities of the world united, we’d be a majority. And we could get shit done.

When you combine Haraway’s cyborg manifesto with disability studies, you get cyborgs – because most if not all disabled people are cyborgs in one form or another – who are equally human with all the other equal humans.

The inaugural winner of the Donna Haraway Award includes cyborgs of many kinds, including a person who is, effectively, a quadriplegic using a wheelchair. No one considers him “wheelchair bound”. Just like no one considers a nondisabled person “mobile phone bound” or “car bound”.

Congratulations to John Birmingham for The Cruel Stars. 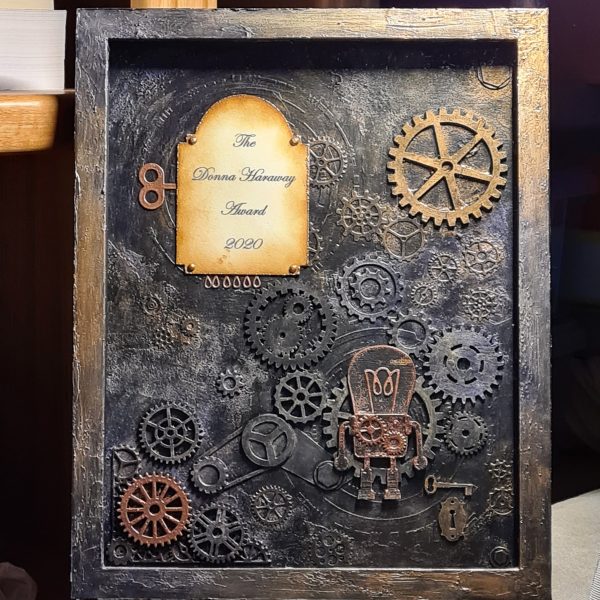 My choice of winner

Although in his acceptance speech John Birmingham specifically mentions one character who survives in a “wheelchair”, I felt The Cruel Stars represented disability in many ways that can only be done justice by a detailed extended essay (not this post). Class structures, poverty, and training of a princess also created difference between various people.

Science Fiction has long tended to represent science as cure and cyborgs as solution or villain. However, The Cruel Stars is more complicated. And genocidal Nazis planning to kill all cyborgs – everyone who drives a car and uses a mobile phone in today’s parlance – is a delicious twist.

I participated in a workshop at Wrapped In Paper teaching me how to make a rougher, smaller version of this award. It was my first attempt plus the class was only 3 hours long. In contrast, it took – on average – a couple of weeks to make each award in this series, from planning to execution.

Several cogs cut from craftwood also met the black gesso. As did oh-so-many cogs die-cut from cardstock. Many of the cogs gain dimension by gluing varying numbers of layers of die-cut cogs together. Likewise for the “cyborg” and other elements like the coil of copper wire and the clock key.

I purchased the actual key and lock as precut craftwood then painted them black.

I used a “HUD” (Heads Up Display) stencil on the background with texture paste to gain the texture on the backing board, which I then painted with black gesso. (I used A LOT of black gesso.)

When it came to placement, I started playing then nearly hyperventilated from stress and second-guessing myself. Edward stepped in to help: he spent ages playing with the components to organize placement then gluing them down.

The text printed onto thick watercolor paper, die cut. And then I glued three layers of that paper together to give the award itself more “weight”. I inked the award to age it and dug out some screw-head embellishments.

Then came the metamorphosis: I used three different colors of metallic beeswax to transform the dull black frame and backing to glowing metallic shades.

Reassembling the award was simple: make sure the backing matched the frame, insert glass, clean glass interior, insert craftwood buffer, insert backing board with hook for the wall, and bend the fasteners closed. Voila. It only took weeks and lots of agonizing. But I think the Donna Haraway Award is fun: fun as art & craft, fun as an award, and the recipient is fun to read.

I don’t know how many people will read to the bottom of the page but, if you did, YOU ARE AWESOME AND AMAZING. Whether you did or not, I wish you all the best. Stay safe!