I’m catching up on my emails. I figure this post is better late than never. — Editor. 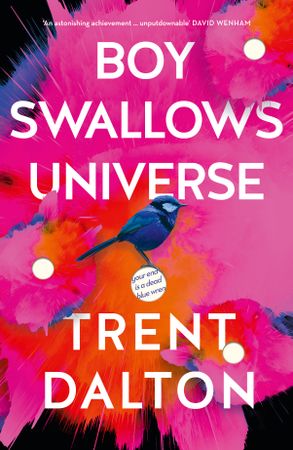 Australian Independent Booksellers are thrilled to announce Boy Swallows Universe by Trent Dalton (HarperCollins Australia) as their favourite Australian book from last year and the winner of The Indie Book Awards 2019 Book of the Year. The bookseller judges’ commented that: “Dalton’s characters and writing style are what make this book the standout. The language and phrasing used truly evoke a sense of place and time, and the numerous anecdotes and smaller details connect you to a cast of unique characters that are difficult to forget.”.

HarperCollins Publishers Australia recently celebrated a major milestone for Trent Dalton’s Boy Swallows Universe; it has now sold over 100,000 copies across all formats in Australia alone since its publication in July 2018.

Dalton’s debut novel has been embraced by readers around Australia and is now attracting critical acclaim – winning The Indie Book Awards 2019 Book of the Year and the 2019 MUD Literary Prize. Boy Swallows Universe has also become an international publishing phenomenon – due to be published in across all of the major publishing territories, and in more than 28 languages, with more deals to be announced in the near future, including for screen and theatre rights.

Catherine Milne, Head of Fiction at HarperCollins says, ‘It is just a joy to watch so many people – in Australia and around the world – fall in love with such a special novel. Trent Dalton’s Boy Swallows Universe is a glorious, big-hearted, irresistible Australian classic, which is going to be loved by readers for years to come.’

The Awards recognise and celebrate the indie booksellers as the number one supporters of Australian authors. What makes our Indies uniquely placed to judge and recommend the best Aussie books of the past year to their customers and readers, is their incredible passion and knowledge, their contribution to the cultural diversity of the Australian reading public by recommending books beyond the big brands, and their love of quality writing.

Without further ado, here are the Category Winners of the 2019 Indie Book Awards:

YOUNG ADULT WINNER:
A Song Only I Can Hear by Barry Jonsberg (Allen & Unwin)

The Indies are considered the forerunners of all major Australian book awards. Since the Awards inception in 2008, the Indies have a well-deserved reputation for picking the best of the best in Australian writing. Past Book of the Year winners have gone on to be bestsellers and win other major literary awards. Previous winners include: Nevermoor: The Trials of Morrigan Crow by Jessica Townsend, The Dry by Jane Harper; The Natural Way of Things by Charlotte Wood; The Bush by Don Watson; The Narrow Road to the Deep North by Richard Flanagan; The Light Between Oceans by M.L. Stedman; All That I Am by Anna Funder; The Happiest Refugee by Anh Do; Jasper Jones by Craig Silvey; and Breath by Tim Winton

‘I am so unbelievably happy and so truly honoured that Boy Swallows Universe has won the Indie Book of the Year. This book comes from a very personal place for me, from the depths of my soul, and the wonderful indie booksellers put that story in the hands of Australian readers – this book would be nothing without those amazing booksellers. Thank you so much from the bottom of my full and humble heart.’

“We are thrilled with the recognition this award bestows. Boy Swallows Universe is a uniquely generous and full-hearted novel – much like the author himself – and we’re delighted it is finding a place in so many readers’ hearts. Our grateful thanks to all the independent booksellers who have shared our belief and supported the book with such enthusiasm. Hopefully this is just the beginning.”

“Over the last eight months or so, I’ve been privileged to talk to many people about this novel, and have read many, many letters, texts, tweets and emails to Trent from readers about Boy Swallows Universe. It is an extraordinary thing, this novel, this gritty, gorgeous, heartbreaking, rollicking, endearing and powerful novel – it has touched so many people across the country, so much so that many of them have felt compelled to reach out and tell him what this novel means to them.  And isn’t that the power of a great story?  It transports us, brings us together, speaks to us, and gives us the joy of a shared experience. Trent is a master storyteller, and his story is now our story.  And that’s a beautiful, humbling thing to be part of.”

“It’s independent booksellers who are fighting the good fight – keeping books and stories, and writers and readers connected in the world, so any moment like this is an absolute privilege, especially in the company of these other writers.”

“Welcome to Country has reached into the hearts of thousands of Australians in a way that I did not expect. I thank everyone who contributed and especially the people at Hardie Grant whose vision and dedication gave me the best opportunity of my life to write about matters of great importance and to reach a large audience, all of whom feel the way I do about our country. We love it. The book helps others to experience it and understand that feeling of being enriched by it and bound to it.”

“I’m over-the-moon excited that Lenny’s Book of Everything has been chosen as children’s book of the year at the Indie Book Awards. It was already such an honour to be shortlisted alongside Shaun Tan, Jessica Townsend, Davina Bell and Allison Colpoys. It means the world to have my novel recognised in such a way and I’m so grateful for all the support independent booksellers have given to Lenny and Davey’s story.”

“I don’t know whether to be more thrilled at winning the 2019 Indies Award for YA fiction – or delighted with the amazing quality of Australian fiction for young adults shown by the brilliant long and short lists.”