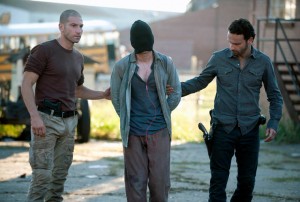 The group decided that Randall (Zegen) needs to be taken away for fear of him bringing his insidious friends back to the farm. Rick (Lincoln) and Shane (Bernthal) drive him far enough out that he won’t easily make his way back then they find a safe place for him to hole up. As Rick and Shane leave Randall, he tells them he went to school with Maggie (Cohan). Knowing this means he already knows the farm’s location, Shane and Rick get into a fight over whether or not to kill him. The fight becomes physical and draws the attention of a zombie horde. They manage to escape with Randall and head back to the farm.

Meanwhile, back at the farm, Beth (Kinney) steals a knife with which to kill herself, but Lori (Callies) stops her. As Beth and Maggie argue upstairs, Lori and Andrea (Holden) argue downstairs about whether stopping Beth was right. Andrea relieves Maggie from watching over Beth, but leaves her alone to make her own decision. Maggie and Lori find Beth in her bathroom with her wrist cut by a broken mirror. Andrea feels she made the right decision because now Beth knows she doesn’t really want to die, but Maggie exiles Andrea from the house.

’18 Miles Out’ ends with Shane seeing a walker wandering through a field towards to farm from the car window, but he says nothing.

I’ve spent several of the past episodes wondering when Rick and Shane’s tension would come to blows and this episode it finally happened. Was it all that I’d hoped it would be? Truth be told, I was kind of hoping Shane would end up a little more worse for wear than he did.

Overall ’18 Miles Out’ brought new tension and was markedly different to previous episodes that have been in the comfortable rut.

“You sit up on that RV, working on your tan with a shotgun in your lap.”